My first day of work started off with a challenge: find the building. I am working at the

Or, more sensibly, on a map:


As  you can see, there is a metro stop right next to the lab (Gregorio Marañon), which leads right out to the Calle de José Abascal. Now, I don't know about you, but Calle de José Gutierrez Abascal and Calle de José Abascal seem close enough to me, especially coming out of the subway without a Google Map printout and without a map that extends this far north of the city of Madrid itself.


Needless to say, I walked for something on the order of 15 minutes in the wrong direction before deciding to turn around. Eventually I found the lab, but I got lucky because Ivan, the postdoc I am working with, was making a phone call outside the side entrance to the lab.
I was told to get there at 10am and ended up being only 20 minutes late. But of course once I got there and got introduced to everyone (didn't have to dos besos anyone, given that they were all in shock that I knew basic Spanish), we all went to get coffee (only 85 cents!) at the university cafeteria and talked about the differences between MIT and UPM, how I had gotten there the day before, and other pleasantries.


If you don't believe me that the school is called the "superior school of industrial engineers," here it is: 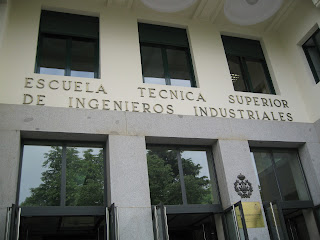 
The entire group was surprised to hear that I spoke Spanish with what they called "a pretty darn good accent" but then quickly learned that my verb tenses always came out wrong.
Taking the morning to drink coffee, read papers, and have my project explained to me, I set out to learn all about homographies and how they relate to computer vision. More on that later. But in the meantime, the group was fairly relaxed and worked at their own pace. My hours were pretty nice: whenever I wanted. In general, people here work from about 10am to 7pm with a coffee break in the morning and an hour-long break for lunch. But every day the schedule is different for every person. I'm sticking to the 10am - 6:30pm schedule because it is convenient for me to go see other sights in the city and surrounding areas.
Posted by Unknown at 2:00 AM